skip to main | skip to sidebar

Posted by John Tallman at 10:55 AM No comments: Posted by John Tallman at 11:40 AM No comments:

Posted by John Tallman at 11:35 AM No comments: 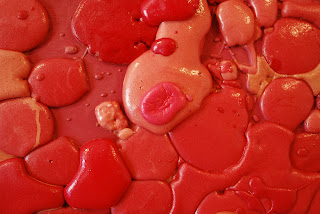 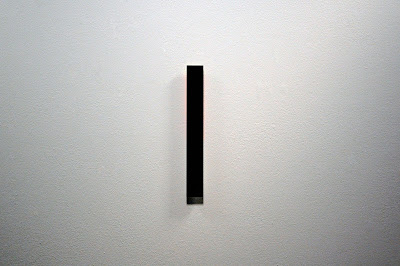 Curated by Ron Buffington and John Tallman, Therely Bare is an exhibition of non-objective art featuring the work of sixteen artists from six countries. Working in a range of styles the artists of this exhibition share in common a subversive approach to the traditions of painting. The exhibition title Therely Bare is wordplay, an inversion of “barely there.” It also hints at the curatorial premises of the exhibition. The physical presence of the work in the exhibition is not in question but the conceptual motives behind the work may be ambiguous to the casual viewer. The exhibition is meant to challenge typical modes of viewing and hopefully raise questions about means of perception. 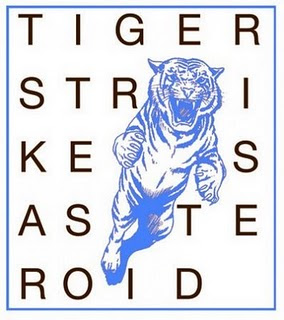 HOURS: Saturday and Sunday, 2pm-6pm and by appointment 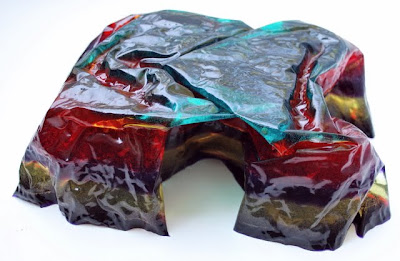 HOURS: Saturday and Sunday, 2pm-6pm and by appointment

Posted by John Tallman at 2:09 PM No comments:

IS Print Show at SNO 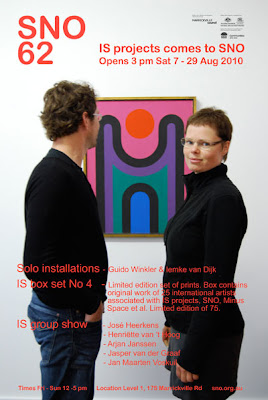 Contributing to the IS box set, number 4. One of 25
international artists.
Posted by John Tallman at 11:05 AM 4 comments: 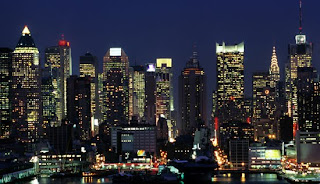 Speed of Color at GKG in Germany 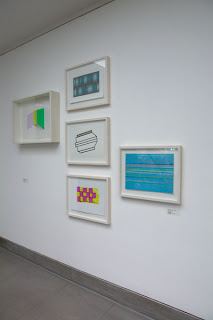 More from IS Projects, here.
Posted by John Tallman at 4:30 AM 12 comments: 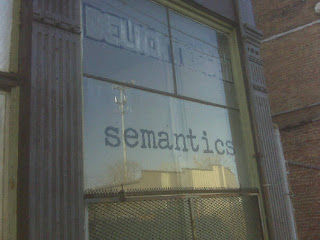 Every year, a few thousand visitors walk and bike around town to look for art, meet artists and affiliates. This year, we will show some of our own work in addition to some work that we have in stock or once collected. The Kunstroute will take place on September 26 and 27. We will be open between noon and 6PM. On view works by Andrew Huston, Jan Maarten Voskuil, José Heerkens, John Adair, Billy Gruner, John Tallman and more. Iemke van Dijk+Guido Winkler, IS projects.
Posted by John Tallman at 8:55 PM No comments: 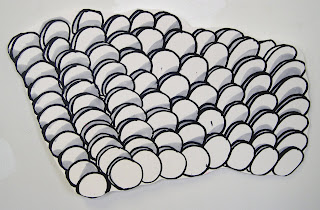 In this exhibition of works on paper, the AVA gallery will serve as a metaphor for the artist’s brain, according to Jeffrey Morton, professor of art at Covenant College. Morton, who served as curator for the show, was inspired by a 1984 installation at the Philadelphia Museum of Art, in which the artist Jonathan Borofsky exhibited a series of large-scale self-portrait sculptures that served as symbolic representations of the artist. “There is something special about the drawings of an artist, and it seems to me that when I view such drawings, I have an immediate access to the thoughts and mind of the artist,” Morton said. The artists who will have works on display in the show include: Bill Thelen, John Tallman, John W. Ford, Jean Hess, Joseph Peragine, Jake Kelley, Jered Sprecher, David Young, Ron Buffington, Marilyn Murphy, Mark Hosford, Jodi Hays, and Chris Scarborough.
Posted by John Tallman at 7:49 AM No comments:

I will be participating in Sydney Non Objective's 5oth exhibition in July.

The details are here.
Posted by John Tallman at 9:19 AM No comments: 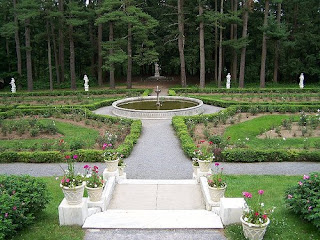 I'll be spending June and July, 2009 in Saratoga Springs
as a Yaddo Residency Artist.
All work and no play makes John a dull boy.

Yaddo
Posted by John Tallman at 11:02 AM No comments:

Tennessee Abstract Painting at the Cheekwood 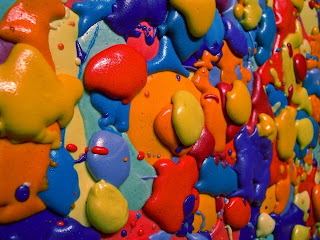 detail, 4'x4', urethane foam and wood.
This is a detail of the painting that will be on display at the
Cheekwood Museum for Tennessee Abstract Painting.
The show will run from March 14 to September 20.
A long time!
Posted by John Tallman at 5:55 AM No comments:

Tennessee Abstract Painting at the Cheekwood 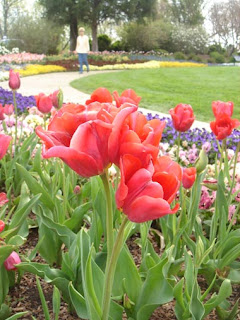 The Cheekwood Museum Exhibition is
approaching. See the below post for
details.
Posted by John Tallman at 10:43 AM No comments:

John Tallman at the Cheekwood Museum

Click here for details.
Posted by John Tallman at 7:19 AM No comments: 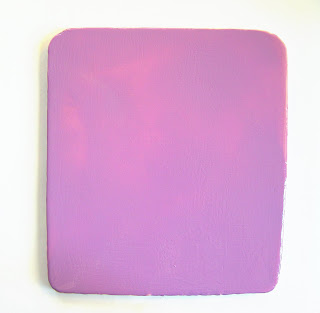 The following was written by Hamlett Dobbins, the director of the Clough Hanson Gallery of Rhodes College, for the catalog of the current exhibition, "Contingent Engagement"...

Several years before the exhibition at Rhodes College, John Tallman made a rubber mold of a painting he’d completed in 2005. This untitled, fluorescent red, acrylic on wood painting wasn’t one of Tallman’s favorites, nor did he consider it a throwaway piece. In the artist’s words, it was “right in the middle, average.” But there was something about this slightly off-square surface with its rounded edges that just felt right. The casual decision to use this painting for a mold started Tallman on a years-long investigation that makes up the body of work for this exhibition. Here we find him beginning at a not-so-simple point of departure and traveling at nearly an infinite number of directions at once. Using the mold of this particular painting, he creates a series of resin, plastic, or plaster casts. These are then used as singular objects, surfaces for painting as well as sites for investigations of a visual language. Over time the original painting becomes a prototype or sorts. The artist is taking the original form of this painting (as well as the notion of what a painting is or isn’t) and “twisting it, subverting it, playing with it, duplicating it, respecting it, disrespecting it, losing it, getting it back, possessing it, repossessing it” all at the same time. More than simply variations on a theme, Tallman uses his unconventional studio practice to explore the almost endless possibilities inherent to the practice of painting (and sculpture). Along the way we begin to gain insight to the minutia of his particular, peculiar decision making process.

Not at all unlike the androids in the film Blade Runner, these copies sometimes become more real than the originals. The accuracy and personality of Tallman’s replicants vary depending on the process and materials chosen. Urethane plastic resin mixed with toilet paper is, by its nature, unruly and lumpy whereas pigmented resin tends to seamlessly capture every nook and cranny of the original mold. Often the pieces are casts from casts (that may or may not be casts from casts themselves). These second or third generation copies take on subtle nuances that naturally arise from the artist’s unpredictable duplication process. Like ongoing Xerox copies, little specks or bumps become amplified the more you move away from the original copy. Leaving these imperfections, Tallman embraces the element of chance inherent to such a process. The very act of producing these multiples gives them a built-in history the moment they are made.

The exhibition’s nontraditional installation is an extension of Tallman’s exceptionally fluid studio practice. His configurations usually feature paintings on the floor, stacked, leaning against walls as well as a painting’s traditional location: hung flat on the wall. These installation methods provide yet another avenue for the artist to explore the relationships among the paintings themselves, as well as the connections between paintings and the spaces they inhabit. This intentional shift away from comfortable notions of what a painting exhibition looks like provides a space where the viewers have to renegotiate their physical and emotional relationships to the work.

While the pieces that make up the exhibition share a common point of origin, they are extremely varied in their execution and completion. A number of the paintings in the exhibition exist simply as they were originally cast, while others are altered greatly: painted, broken, reformed and repainted again. Additionally, the materials used vary from piece to piece. Many are made from a seductive, translucent, pigmented resin. Their gentle, luminous shapes are juxtaposed with their heavier looking counterparts that are cast using a bumpier, more opaque resin or the dense, rounded plaster casts. Additionally the crisp, even edges of many paintings contrast with the jagged uneven lines of those that have been broken and reformed. While the paintings share a playful, pop-culture influenced sensibility in terms of color, each piece is informed by its own thoughtfully considered and keenly nuanced palette. When employing a pared down visual vocabulary in the way Tallman does, every step must be carefully weighed. Subtlety is always more complicated than it appears. A close inspection brings one to admire the artist’s uncanny ability to deftly combine the simplicity of form with these complex, occasionally unruly, often caustic colors.

The title of the exhibition, Contingent Engagement: A Recent Painting, offers additional clues to understanding the artist’s intention. As evident by the works in the exhibition and as the title implies, the artist is deeply engaged in the rigors of creating and exploring this territory where chance and repetition play such an important and influential role. The title also refers to the exhibition as A Recent Painting. As he works at this model again and again, he is not trying to find a right answer. Rather, he is striving to establish a better understanding of the forms and materials as well as their place in the world. These are the workings of an artist who revels in the notion that his studio practice is a vast continuum. Tallman has established a process that not only allows one thing to lead to the next, but operates with the idea that all previous and subsequent activities are connected.
Posted by John Tallman at 4:46 PM No comments:
Older Posts Home
Subscribe to: Posts (Atom)